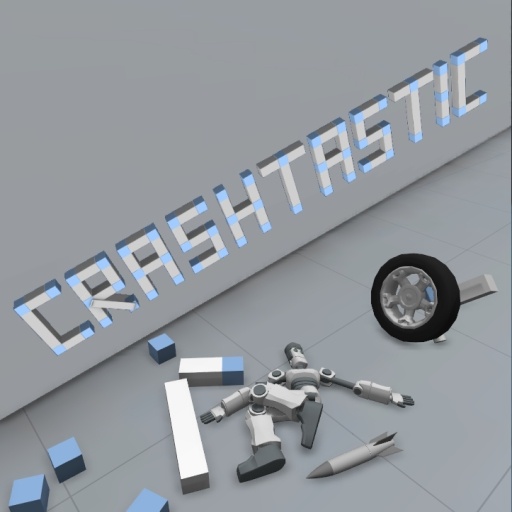 Rockets, rag dolls, and big crashes with fully destructible vehicles. What more do you need?

This unique 3D physics based puzzle game, will test your imagination and creativity, but will almost certainly put a smile on your face.

Version 0.5.0:
Bug Fixes and Improvements:
Added a true follow camera. I will be continuing to iterate on the camera in future patches.
Changed the default camera position to be behind the robot in many levels.
Changed the art of the checkpoints.
Updated to latest Unity version 4.2
Various backend changes to get ready for Steamworks integration

Crashtastic, added the piston part in patch 0.4.8. Unfortunately it didn’t work very well. This patch aims to fix those issues.

Piston Fixes:
Improved stability by rewriting the piston code.
Increased piston strength.
Fixed several issues related to Piston placement in the editor.
Changed the art for the piston
Add ability to have multiple key binds per piston. This can be done via the tuning menu.

Bug Fixes and Improvements:
Fixed a few issues with the editor for pistons and braces. You no longer need to attach it to two nodes. One will be created at the correct location.
Fixed hotkey functioning when in the tuning editor.
Increased joint strengths for all parts. Vehicles should be a bit more rigid.
Added replay functionality to sandbox mode.

Crashtastic, now includes a piston (which can be controlled with custom keys) and the rotator!

The Rotator:
The Rotator isn’t exactly a piece. You are allowed to select a given side of a node which will rotate with any attached piece.
In addition, you can limit the rotation of the piece by selecting the appropriate pieces of the “starburst” when creating the rotator.

Piston:
Pistons are added in a similar fashion to a brace.
They can be controlled (default keys are I and O). The default keys can be changed in the “Tune” menu.

Bug Fixes and Improvements:
Improved brace system. You no longer need to attach it to two nodes. One will be created at the correct location.
Fixed lighting on a few levels and menus.
Fixed issue wih extra pieces showing up in replay
Fixed an issue with duplicated Nodes.

Version 0.4.7: Sandbox Mode Now Available!
This is one of the most requested features for Crashtastic, and the first iteration of the Sandbox editor is now live! In the near future, the same editor used for the sandbox mode will allow you to create and share challenge levels. *NOTE* This is still a work in progress
Move the camera with W,A,S, and D
Rotate the camera by holding down the right mouse button and moving the mouse.
Control-C will copy the current selected object.
Click Move/Scale/Rotate will change the gizmo allowing you to perform each action.

Changes to the Replay System:
Hide the Replay UI by pressing “Z”
Start and Stop the replay by pressing the Spacebar
Pressing “C” will toggle between follow and free camera. While in “Free Camera Mode”, control it with “W,A,S,D”, and rotate the camera by holding the right mouse button and moving the mouse.

0.4.6:
Game Improvements:
Added a button to go to the editor from the summary screen.
Changed the name of the Replay button to View Replay for clarity.
Increased the joint strength on wheels. They should no longer break off like they were “connected with duct tape”.
Added vsync support in settings menu.
Bug Fixes:
Fixed the lighting error on the setitngs menu on the main menu.

Crashtastic Version 0.4.5:
Game Improvements:
Performance, Performance, Performance – I completed the first pass at improving the simulation performance of the game. It should be much better for bigger designs!
New Features:
Implemented a new Crashtastic Launcher. You should always launch the game via the updater, as it is responsiblefor downloading the latest version, and logging you in to the game.
Added New Mission Objective: Checkpoints. On levels that use checkpoints, your robot needs to pass through each checkpoint (they will turn green) before crossing the finish line.
New Levels:
Simple Checkpoint – The first introduction to the new checkpoint system.
Checkpoint Slalom – A more difficult course where you need to weave back and forth.
Figure 8 – A difficult checkpoint challenge, where you need to race around a figure 8 course. Tip: Use controllable rockets!
Head-On Collision – A Box on legs? It’s going to take something a bit different to take this guy down.

0.4.4 Alpha Release Notes:
Editor: Updated the UI to be consistent with the other UIs in the game.
Editor: Updated the UI backend, which should fix the annoying can’t press GO issue.
Editor: Added hotkeys for all of the pieces. The hotkey is shown in the editor with an underscore under the hotkey.
Editor: removed W,A,S,D support for camera rotation, arrow keys still work.

Added the ability on some levels (currently levels #16, 17, and 18) for you to assign keys to individual rockets, so they can be actively controlled. You will see an “Assign Key” field on the pre-simulation screen next to the power slider. I am going to be watching the feedback on this functionality with the thought of possibly opening it up on all levels.

0.4.3 Release Notes:
Two New Levels:
“Crossing the Chasm” – Jump over a chasm to the exit, but don’t let your robot hit the ground!
“Target Plateau” – Get your robot to the target and keep him there.

New Features:
Added keyboard camera control. Arrow keys, and “W” “A” “S” “D” in the editor.
Added new game mode. Stopping in a Zone. Target Plateau is the first level of this type.

Bug Fixes:
Fixed extra piece when saving. Old designs will still have an extra piece. I will fix this next patch.
Decreased volume of the rocket sound!
Fixed Robot breaking in the editor, when colliding with pieces.
Fixed YouTube UI overwriting itself.

0.4.2 Release Notes:
Fix for not being able to save in the editor (*Note* I can’t guarantee that your designs will remain loadable in the future, as the game is still in development, I will do my best to make sure they do).
Fix for Inconsistent naming of login fields.
Fix for issues with the brace interface it should be much smoother now.
Fix for rocket sound playing occasionally after the level has ended.
Added ability to delete pieces by right clicking
Fix for clicking Remove followed by Brace, it still acts as if Remove is selected