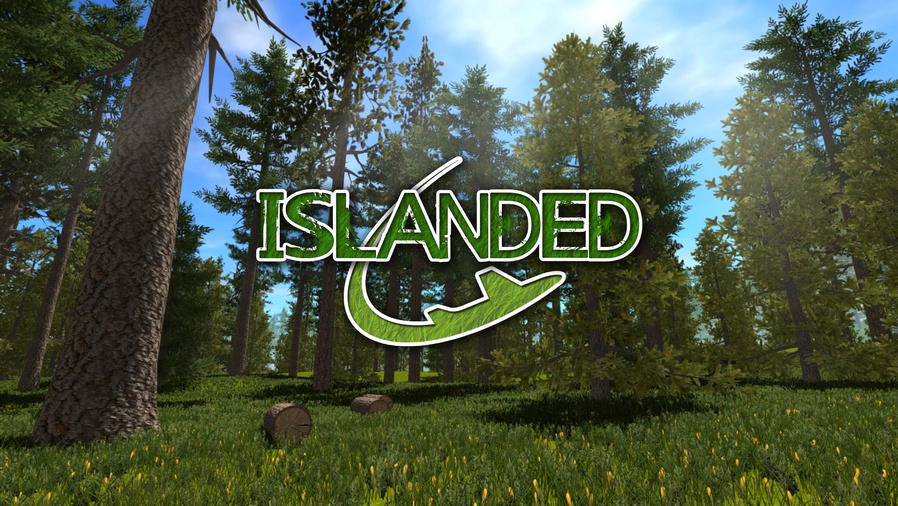 Islanded it’s a survival nature sandbox game, trying to achieve a high quality graphics, but without skimping on what is really important in a sandbox game, creation. Based only on reality, in Islanded, zombies, werewolves or dragons are still myths. Face off against being truly lost. Fight against the nature, your decisions and your actions will decide how the island responds to you. Chop every tree you see, use any resource that you can get, build anywhere you want, and defend yourself against all the wildlife that dosen't want you on the island. Search, fight, build, Hide, attack, be the king of the island. Be Islanded.

Alpha 8:
Welcome to the Build alpha Update! With this update the bases of the building system are established, which means that a lots of new blueprints will be added in the future to create the most expansive list of build parts / bluerints ever existed in a sandbox.
This update video is based exclusively in the build mode and how it works. Here you have a little tutorial:

Building System:
You can now build any structure you want, anywhere. For now, the build mode don't use resources to build, just for test purposes.

In-game, pressing Tab key will activate the build mode. In this mode you can edit and remove old blueprints or builds just by looking at them and stay properly close. In build mode, you can press B to open the Build Menu, which contains (for now) 5 categories of different type of blueprints. Every category will have a lot of different shape and material blueprints for you to choose. To build, just select the blueprint you want, and place it in the world. Blueprints can be attached to any collider, and are designed to be attached to other blueprints perfectly to avoid weird structures.

There are some keyboard shortcuts to avoid repetitive movements, like placing the same blueprint used before (F), deleting last placed blueprint (Ctrl+Z) and deselecting the actual blueprint (Del).
Some uses of the new build mode. You can see more images here.

Inventory & Resources:
With the new build mode, greater number of resources are required. To avoid collapsing the player inventory with limits like the 10 max logs for stack, all resources now have a bigger number of stack before fill another inventory slot. Logs now stack to 100, Stones to 100, and barks to 50.

Save & Load system:
Finally, the save & load system is in the game. This means that any value, object or item in the game (Health, position, time, moon, day, trees, resources, items, etc.) will be saved. It's not an autosave, but you can save at any time by pressing F8 or in the pause menu pressing "Save Game". Now, in the menu you can start a New Game (deleting your progress) or Continue with your saved data. Loading your data is barely detectable, loading screens are equal in time.

In-game HUD & Workshop:
The last update changed the HUD system, but this update perfects it. The big bars are gone, and now the icons display the values. New HUD icon is added to report that the player is tired / running. (This condition will affect the food and other factors). With this remodelation, the HUD is smaller, easy to understand and can display more information.
Also, now any item introduced in the workshop will be returned directly in to the inventory. This avoid big items being spawned above the workshop.

Main menu:
The main menu has been updated to be used with the new save system. Continue button is now enabled and New Game button display an alert to delete saved files. Islanded text has been replaced by the game icon and a new intro has been added.

Player:
New player conditions are added. For now, the only one is Running. Player conditions allow external and internal aspects of the world affect the player capabilities, like Health, food consuming, vision, stamina etc.

AMD still in trouble.
The last version (Alpha 6) introduced a problem that prevents some AMD (CPU) users to play the game over 6 - 7 FPS. This problem has not been located, so if you're one of the players with this problem, I would appreciate if you could post your PC specifications in the Forums.

Trees & terrain resources:
Now, all the trees leave a trunk when they are cut down. If you chop a tree, you will leave a bit of them in the terrain, forever. The logs dropped by a chopped tree now spawn 4 Wood logs and 3 Bark.
Stones now spawn in the terrain and have already been placed throughout the first island. Keep in mind that the stones is the only resource that respawn. For example, trees are permanent and can't be replanted.

In-game HUD & Inventory:
In this update the in-game HUD is smaller and more easy to understand. Now if the inventory is open and you have a tool/weapon in the hands this will not receive the order to attack as in previous versions. No more attacking the poor workshop. You can also unequip your actual tool to become barehanded. Also, if you want to take a screenshot or make a video, now you can hide the in-game HUD pressing F3.

Create system & New resources / recipes:
The create items are now stored in categories to be easier to find in the future. In this update there are two categories: Resources and Tools. New resources, Wood log and Bark, both obtainable form the trees. Also, new recipe to create sticks: x1 Wood log = 5 sticks.

Graphic options:
As many of you ask for, now exist a Motion Blur option to disable it completely. Additionally, to avoid some problems with "invisible trees", now Level of Detail is called Draw distance and has a minimum of 10%.

If some of you have problems of small windows or by mistake selected a wrong resolution, you can change the graphical options outside the game thanks to PlayerPrefs. More info. (Advanced users).

Terrain:
The most impressive change, is the terrain. Totally retextured, with new shaders and grass. This new terrain achieve more realism, and a better looking island. Also, this update re-enable the water and underwater effects.

Graphical interface:
This update change all the GUI in the game. Add advanced options to the menu, credits and replace the loading screen, to load the scene faster. The options menu now save your preferences to load them every time you start the game.

Create system & HUD in-game:
The create system has been totally re-writed to work faster, and be easier to the player. The crosshair is now disabled, and new vital bars are added in the HUD. All this content can now be learned by a tutorial that is displayed in the top right screen.

Visual Effects:
The sky now has better global lighting, the sun has a new flare, and the date system now change the day, the sun angle and the phase of the moon. The motionblur has been reduced by popular demand, and the sunshaft intensity is now lower. Also, thanks to the changes in the terrain and sky the performance is a lot better.